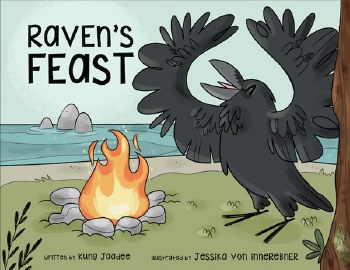 After the Raven (Yaahl) had finished creating the world; he realized that he was lonely. So he invited the whole world to join him in Haida Gwaii for the greatest feast you could ever imagine. At the end of the Feast each person, from all 4 sacred directions, was given a special gift that would change their lives forever!

Kung Jaadee (Roberta Kennedy) is a traditional Haida storyteller, singer and drummer from Haida Gwaii in Northern British Columbia. She teaches Xaad Kil/Haida language and culture five days a week. For more than 24 years, she has delighted audiences across Canada at festivals, schools, museums, aboriginal celebrations and conferences. Kung Jaadee loves singing her traditional Haida songs, drumming, laughing, baking and learning her language. Her name was presented to her at her great uncle’s memorial feast by her cousin, Crystal Robinson, and means ‘Moon Woman’.